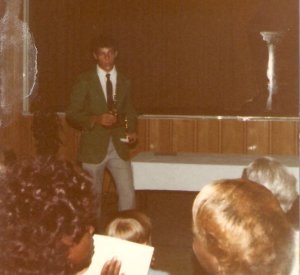 Me at Escambia Christian School awards day in 1981.

The Summers of 1979-83(?), a number of congregations in the Pensacola area helped sponsor the  Annual Southeastern Soul Saving Workshop on the campus of the University of West Florida.  Part of the workshop was specifically for teens held at Gateway Church of Christ.  300 – 400 teens would listen to speakers like “Cool Joe” Beam, Larry Sawyer, and Dick Webber.  These men and others would challenge us to live up to what we began in Christ.  We would sing”new” youth songs which are now the “old” classics, and we would attend “break-out” classes.  One of those classes at Gateway stands out in my mind.

I do not remember the year.  I think it was 1983, because I vaguely remember driving there.  When we arrived, the registrars directed us to choose a colored sticker to go on our name tags,  this sticker would determine what classes we would attend and when.  One of the classes I chose was a class that promised an experience of 1st Century worship.  This class choice came with instructions on finding the class room.  We were told to look for certain colored marks (stickers) on the walls, doorways, and posts.  These would direct us to a secret location where our class would meet.  We were told to tell no one where we were going and to be sure we the men wearing read bandannas on  sleeves did not follow us.  This class was already fun and we were not even there yet.

When my friend(s) and I finally made it to the class room, we realized we were in a large storage attic.  The lights in the room were battery powered lanterns.  The teacher spoke in soft tones so that those outside the room could not hear what he was saying.  The teacher welcomed us, made sure we were not followed, and then he told us the history of the struggles of early Christians meeting in secret locations, such as private homes or catacombs for fear of death.  Then we began a mock worship service beginning with singing.  At first we all sang softly, but as we continued to sing (our voices blending in harmonies) our volume became louder.  Soon we forgot we were hiding.  That was when the door violently burst open and three men came in with red bandannas on their sleeves and carrying plastic (toy) machine guns.

The three “soldiers” were yelling threats, making accusations that we were violating the law by assembling here.  One of them pointed his toy gun at the girl sitting next to me, as he did he asked her in threatening tones, “Are you a Christian?”

Tears, streaming down her cheeks, she replied, “No! I just came with a friend.”  The room became deathly silent as we all began asking ourselves the same question, “Would I have said, ‘Yes’?”

It was just pretend or was it?