This is our ninth walk as we journey through Mark’s account of the life of Jesus of Nazareth. We are across the half-way point, do not turn back now! We are learning so much from this man, Jesus. He is turning heads and hearts everywhere He goes. During our last walk with Him, He asked His followers a challenging question, “Who do you say that I am?” Peter breaks the silence and confesses that Jesus is the Christ, the Son of the Living God! If you believe, with Peter, that such is the case, I am joyful for you.  I hope and pray you commit your life to Jesus as the Christ.

Now let’s catch up to Jesus and the apostles as the walk the dusty roads of the Middle East.

Walk back and take a look at Mark 9:1. Listen intently to what Jesus says, “Truly, I say to you, there are some standing here who will not taste death until they see the kingdom of God after it has come with power.”

Some standing around on that day; some standing there with Jesus would see His Kingdom. I am sure that Peter, Andrew, James, John, Philip, Thomas, Bartholomew, Matthew, James (son of Alphaeus), Thaddeus, Simon, and Judas were thinking of a physical kingdom with standing armies and a vast treasury. The were considering all the possibilities of being at Jesus side when He ruled over God’s people and even Rome from Jerusalem. They had visions of Jerusalem’s return to world prominence. I am not convinced they had yet fully grasped Jesus’ Kingdom. I know they had not, “Lord, will you at this time restore the kingdom to Israel?” (Acts 1:6).

Some people in Judaism and in Christendom today still wait for a Messianic Kingdom. Some today still look for a future when Christ will return to reign on the earth. But Jesus said some that stood with Him on that day would see the kingdom come with power. Either Jesus was wrong and the Kingdom did not come, or those who wait today are wrong and the Kingdom did come and does exist – today. 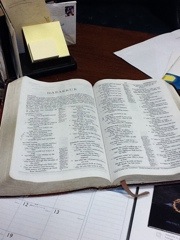 Jesus was not wrong! The Kingdom did come and it came with power. “When the day of Pentecost arrived, they were all together in one place. And suddenly there came from heaven a sound like a mighty rushing wind, and it filled the entire house where they were sitting. And divided tongues as of fire appeared to them and rested on each one of them. And they were all filled with the Holy Spirit and began to speak in other tongues as the Spirit gave them utterance” (Act 2:1-4). All of the apostles, except Judas, were resent that day. It was Peter who would stand and declare the arrival of Jesus’ Kingdom (Acts 2:14-36). A few years later, the former persecutor turned preacher, Paul would write, “He has delivered us from the domain of darkness and transferred us to the kingdom of his beloved Son, in whom we have redemption, the forgiveness of sins” (Col 1:13-14).
His Kingdom is His Church on earth. You are welcome to enter His Kingdom. Those whom He adds to His people are part of His Kingdom. Will you allow Him to add you? “And the Lord added to their number day by day those who were being saved” (Acts 2:47) “Let all the house of Israel therefore know for certain that God has made him both Lord and Christ, this Jesus whom you crucified.” Now when they heard this they were cut to the heart, and said to Peter and the rest of the apostles, “Brothers, what shall we do?” And Peter said to them, “Repent and be baptized every one of you in the name of Jesus Christ for the forgiveness of your sins, and you will receive the gift of the Holy Spirit” (Act 2:36-38). So those who received his word were baptized, and there were added that day about three thousand souls” (Acts 2:41). Be added to His Kingdom – today!